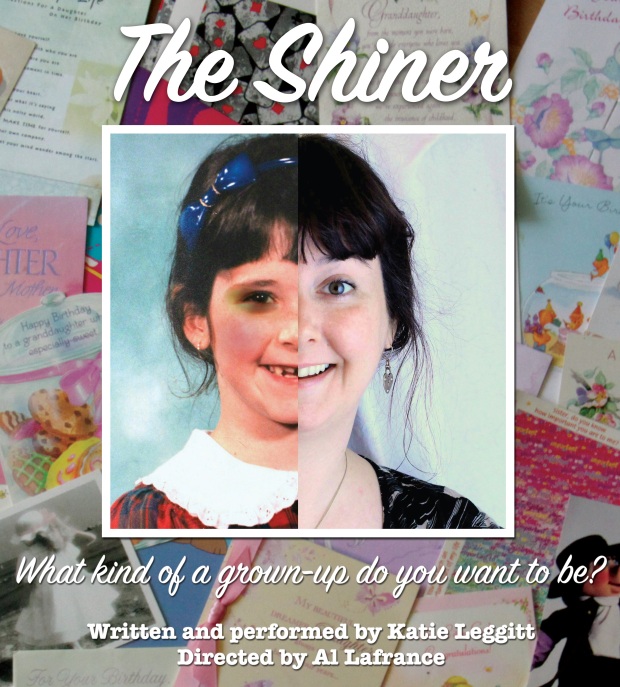 “Her ability to transform with no more that an inhale or a blink enables you to follow her anywhere and meet really quirky folk.” – Montreal Rampage

“A real slap in the face” – Danscussions

Combining sketch comedy and storytelling, The Shiner is a one-woman show that is sure to bring attention to the important role played by spiritual community animators in schools across Québec.

Since 2008, Katie Leggitt has had two careers: Spiritual Community Animation at the English Montreal School Board, and Sketch Comedy, primarily featured at Le Nouveau International’s Théâtre Ste-Catherine. Gracing the stage armed with a variety of wigs and facial expressions by night, and inspiring youth in the classroom by day, Leggitt has always used comedy as a communicative tool, as evidenced by The Shiner.

From habanero pepper-eating students to schemers and sweethearts, The Shiner’s hilarious characters offer the inside scoop on what the often-misinterpreted title of spiritual community animator is really all about. Seamlessly blending the real Katie Leggitt with the fictional Rebecca Reubens, this one-woman show will share sidesplitting truths about classroom life, touching stories of loss and the magic of imagination. Pack yourself a tissue box and get primed for circle time with Miss Katie.

The Shiner was performed at the 2015 edition of the Festival St-Ambroise FRINGE de Montréal.